Warning: this rant is LOOOOONG.

So my mom passed away 9 yers ago when I was 12 on January 1, 2009. And even when she was alive, I was so close to her, I can’t even begin to describe it. It wasn’t just a preteen who loved her mom kinda thing. I was convinced that I would hate my father forever if he ever hurt her, and I was too overprotective of her. I was jealous when she would hug my 2 older sisters or even my dad and wanted her all to myself.

When she passed away, I didn’t find out about it until I was flown into India from our permanent home in Dubai, walked into my uncle’s apartment where she was staying, and saw her dead body draped in white, cotton stuffed in her mouth, nose and ears.

I remember that day clearer than any day in my life, and I think it’ll always be that way. Worst part was, I had just left India on December 30, 2008, because my school was going to reopen after the winter break on January 2, 2009, and before I left, the doctors had finished telling us that “in 3 months, she’ll be swimming back to Dubai herself.” 2 days later, she died in her sleep, from a quiet heart attack, with my dad watching tv next to her.

I think on some level he feels he could’ve saved her and hates himself over it but it was nobody’s fault.

Anyhow, after her death, it took him 6 years to be able to channel his grief through an outlet without tears but the outlet he chose was and has been anger.

In our culture, the father pays for all their kids’ to go to school up until post-grad. It’s the norm.

But I’ve never had emotional support from him.

In our community, you never, ever, EVER date. Your parents choose a few guys from the community (they have to be of the same caste and creed as you), the parents of both families must know each other beforehand, the girl meets a few guys ONCE each, and you select a boy from that shortlist. Once chosen, you instantly get engaged and married within 3-4 months. The boy doesn’t have to be a virgin, the boy can have flings, and the boy can continue to study but the girl must be a virgin, never date, and should pause any studying for the first 5 years of the marriage because she must deliver a child by the end of the 2nd year of marriage. She must stay home while he works and she must be okay to live with his entire family for the first few years.

My family truly believes this process is giving girls a *choice* 😂😂😂

So, anyhow, I move to Canada at age 17 after having been raised in Dubai, UAE my entire life, and secretly lost my virginity when I was 19 and felt exhilaration in being able to be free and practice safe, protected, but amazing sex.

Had a couple one night stands, and met my current (and first and last ever) boyfriend who is white.

A whole thing happened when they found out we’re dating wherein they threatened to force me out of Canada (in May 2017) and “put me in shackles until I get back to normal” and I ran away from my own apartment where they were visiting and fast forward to June 2018, my father and I have no emotional relationship.

I love him and it would kill me if something were to happen to him, but he thinks that I can’t be happy from my own choices.

My community (including my immediate family) believes that for a daughter, her happiness MUST ONLY stem from doing as her parents wish for her entire life.

Not a single word of exaggeration.

So even when I graduated in June 6, 2018, with a 3.26 GPA (by kicking ass at Statistics - a class I failed before and was terrified of like spiders and snakes), he still can’t be happy for me.

And even though I only lost one parent for real, I feel like an orphan because my sisters only did what our parents wanted (2nd sister is in a horrible marriage with a severely verbally abusive husband who in a rage raised his arm at me in an attempt to hit me a few months back JUST FYI but they dismiss it as ‘marriage woes’ and ‘anger issues from having a bad childhood’).

My sisters don’t have my back whatsoever and the oldest one has flat out said that if she does, it’ll be because of me and my choice to date (at all) and on top of dating, he isn’t even a brown boy from a Hindu religious background. (Brett is an atheist.) This oldest sister has also Skyped me to specifically tell me that she will never support my “affair” (“it’s only a relationship when you’re married”) and that even on the day I get married, she’ll just show up begrudgingly.

Brett is this ball of sunshine on everyone’s cloudiest days. He is so immensely caring and kind and compassionate, it makes me cry when I think of how much we love each other because my heart can’t hold all the love.

On June 29, 2018, we’ll be completing 1 year and 9 months together and this man has been a ROCK, A FREAKIN MOUNTAIN of support through every damn thing in my life. After all the crap my family thinks about him and “his people”, he still wants to establish and develop a relationship with them and wants me to not have to cut ties with them.

So the conclusion is this-

I feel absolutely orphaned in a family of 5 (both sisters, their hubbies, and our dad).

This first picture is from my grad on June 6, 2018. My family has lied to every single immediate relative that I’m single and that’s it. My relationship is a “major embarrassment” and they’re always worried about “how they’ll break this news to the community.” 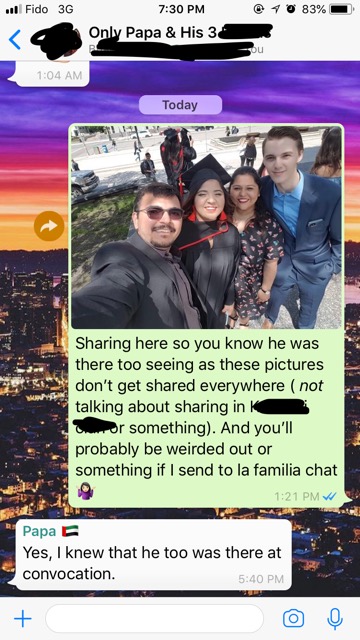 This next picture starts with me saying ‘I love you’ for the 2nd time in 3 days, the last time was for father’s day. He /always/ says it back. So idk if he just missed it or doesn’t want to say it anymore. (The meds I’m talking about are his diabetes stuff from like decades ago that he still takes, nothing new or anything if you know what I mean.) 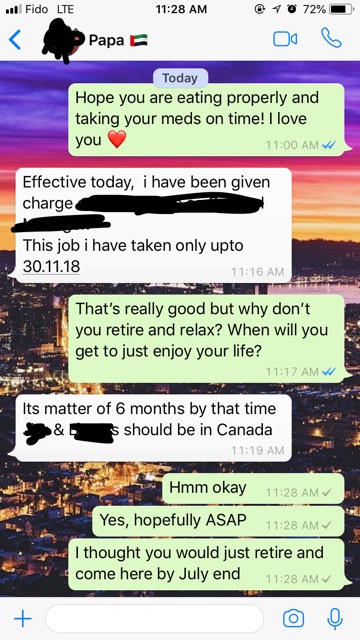