We have been together for just about 11 years. He is my best friend, my everything. The most genuine loving person I have ever met.

We are expecting our first baby due October 22!!!

Marriage has been something that we have talked about for years but when you truly love someone, have already lived together for 7 years, and do everything with and for each other, marriage is just a title in our eyes. Our families already look at us like we are married even though its not official.

He has always told me he wants to be with me for the rest of his life and his reason for us not getting married yet is because he feels the need to get me a big ring because he says I deserve it. I’ve always told him that I would marry him, ring or not..it’s just one of those material things that my mind isn’t set on. I’ve told him he could propose to me with a ring pop and I would be just as happy and surprised as some big diamond.

Yesterday he got off work late but called me when he was a couple blocks away getting gas. Starbucks sounded good to me so I ran out to the garage and waited for him to pull up to ask him to take me to get a drink.

He pulled up and I asked him to take me to starbucks and he was hesitant to unlock the passenger door for me to hop in the truck. It was raining so I was like cmon unlock the door let me in and he puts the truck in park and tells me wait and that he will help me up in to the truck.

He runs around to the passenger side and helps me up (getting in to a big truck when you’re 37 weeks pregnant is a little bit of a struggle) and once I’m in the seat I turn to him and he’s down on one knee in the rain holding this watermelon flavor ring pop (watermelon anything is something I love and he knows this) and asks me to marry him. I cried because he is the sweetest most thoughtful person and I would accept this watermelon ring pop any day lol 💕

I wish I would have got a picture of him but it wasn’t on my mind. He told me he left it in the package because he wasn’t sure if I would want to eat it or not. And even though its watermelon and thats my favorite, I’m keeping it ❤️

Our plan is to go down to the courthouse this weekend and get married with our parents there. As we were driving to starbucks he called his mom and grandmother and was so excited to tell them. He melts my heart ♥️ 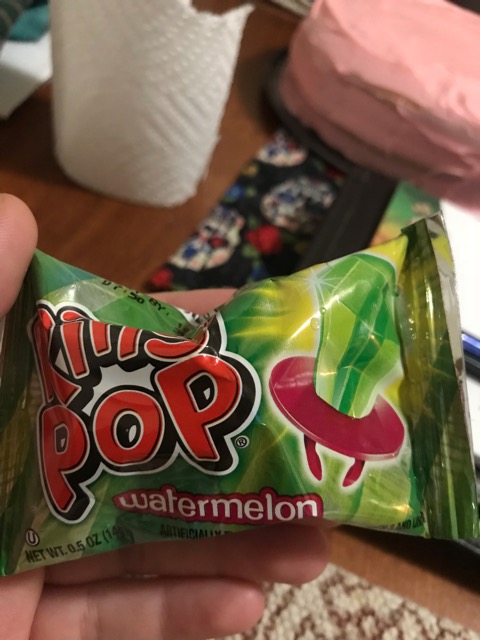