I am desperately needing a place to vent. Because idk why I get in my feelings when it comes to my husbands family. I’m a cast out and I am very close to wanting out of our 7 year relationship. I feel so torn man.

I have tried my best to be a great step mom and I just always get undermined and treated like shit. I actually go out of my way even more than my own kids to be sure he gets what he needs and more. But it’s never enough.

My husband made a rule that none of our kids will have a phone before the age of 12. I have a 10 year old who makes straight As, is in student council, and a extremely respectful and responsible student. He walks to school and back with his little 7 year old sister and I asked my husband if it was cool to at least have a phone for them in case of emergency. He still was firm on no phones.

This is where I am at a loss. I love my step son but he has extreme behavioral issues. The only person he doesn’t act bad around is my husband, so my husband literally doesn’t believe anybody. Even though every teacher since pre k 4 and 2 different schools have all had a lot of behavioral issues with his son. I could go in depth ur I’m not bc he is a sweet boy. He just doesn’t get right.

After a weekend of constant video games and tv but he was suppose to be on “punishment” I didn’t say anything bc it isn’t my place! I’m not the mom at the end of the day. If my kid got written up he wouldn’t have shit point blank. Have some respect for adults !

Well we go to my husbands mothers and she buys him a phone!!! My husband took it! He was all excited ! I bit my tongue and smiled that whole day until we got home and I said well since the “no phone rule is lifted I’m going to go buy my kids their first phone since you let your son have one! He told me NO!! And stated yelling at me like I was being unfair. Look it’s not about him having a phone. I could honestly care less. It’s that he all the sudden bent the rules when it was in favor of his own son. And how could he allow his mother to make a decision on behalf of our house hold?! We got in a huge fight am I’m just wondering am I over reacting??

Below is a pic of his son behavioral log. But his parent (my husband and his mother) keep saying it’s the teachers fault and defend their son to the T. But I feel like they are teaching their child the wrong values and I literally have no voice !!! I’m so torn. 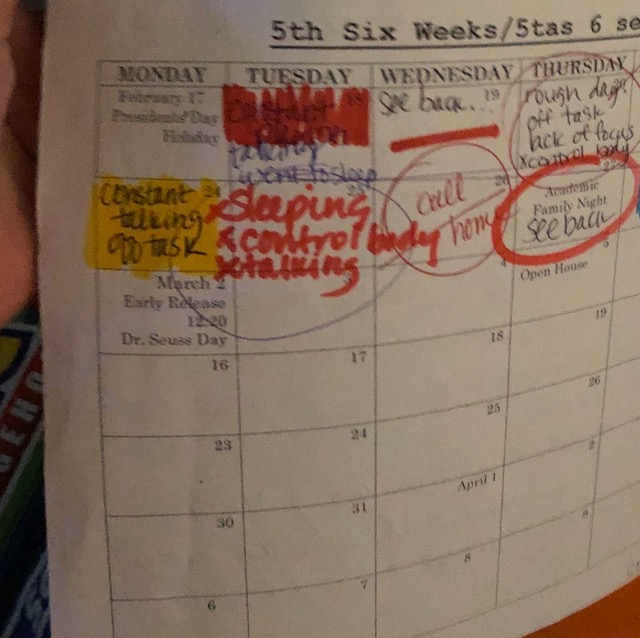