I really needed this guys...

Since having our daughter I've been having a rough time. I had a rough pregnancy and a traumatic birth followed by a 54 day nicu stay. I was two hours away from home and he had been promoted to a location 2 hours from home in the opposite direction so I spent two months feeling very alone and depressed when he was at work. Today my husband was sneaky and told me he wouldn't be home because of work, then showed up super early, got us an amazing dinner, we watched a movie, joked all night, and then he "went to the bathroom" when there was a knock on the door... A guy was standing there with these roses and chocolates with a beautiful note for me. My husband was standing in the next room watching and told me he knows how rough things have been but he never wants me to forget how in love he is with me and how no matter what I'm his, he's mine, and he loves that were best friends. I needed this so bad. 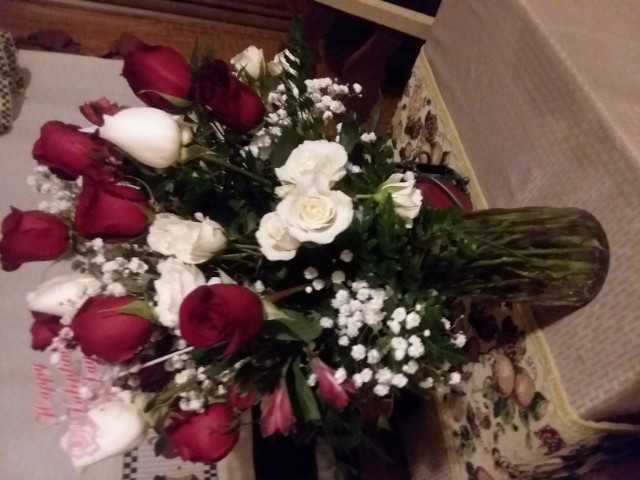 It's been hard adapting to being at home with the baby, his new job, and everything that happened the last few months of my pregnancy into the first two months of her life not including other life stresses... it felt like the walls were coming down on both of us. A few nights ago we were laying in bed and we were talking about it, and we both sort of agreed that while it's been hard were happy to be in this together and that things will be getting better so we can breathe. I'm just so happy. I love this man.