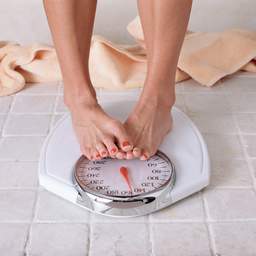 Healthy Weight
This group is all about reaching or maintaining a healthful weight.

Okay, this is something that's always bothering me every second of the day and impossible to ignore or push aside, LITERALLY. My former OB/GYN told me that my hormone levels, uterus and ovaries are all normal, but my period still hasn't regulated. Yes, even at that time I was overweight and I was working like crazy to lose it all again, to get back into a size 12 or lower.

So, after dealing with all that she puts me on BC, no biggie, but it wouldn't work and so I stopped taking it, told my doc as much. So, after I tell her this she decided to put me on Depo Provera which she tells me will cause weight gain, calcium loss and shrinkage in the breasts or I could the hormone stuff.

I chose the hormone stuff since bone degeneration runs in my family, I was ALREADY overweight and I would prefer my breasts get bigger...not smaller, but she gave me Depo Provera anyway. Well, NOW I'm even MORE overweight and it was hard as heck to lose weight before, but now it's even harder after getting off the Depo Provera. 😢😭😢😭 Can anyone give me some advice because it's effecting my ability to work. I'm probably close to or over 400 lbs. now so I REALLY need to lose the weight.