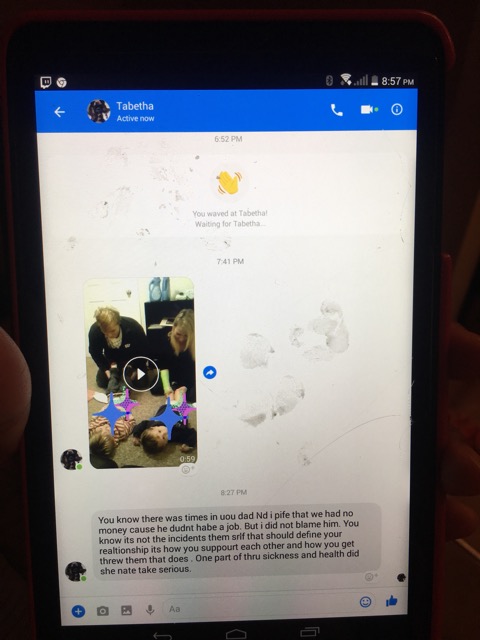 He had a good job as a corrections officer we moved in with my mom so he could finish his training. And then in October moved to Depere in a $1000 apartment. We could afford it because he was making good money. And we had good insurance. Well part of the job was working mandatory overtime. Which he hated but the money was good. I couldn’t work because his ot was always unpredictable. Well we moved and he had taken two weeks of paid vacation. Then the week after we moved he got lazy and didn’t want to work the overtime. He was prescheduled to work a 16 hour shift and decided he didn’t want to. So he left. They told him he would be investigated if he left. And they told him since he left he could resign or continue working with a mark on his record. He chose to leave. We had no savings. Nothing. For 4 weeks no money. Nothing. No food for my kids. My son had a 105 temp and I couldn’t even buy meds. We were broke. Our health insurance we no longer had. Luckily my mom drove from Crivitz to buy us meds and she brought food and diapers. He didn’t even say thank you. My best friend and brother loaned me money for food and he didn’t thank them. I hate him so much. So much. And he doesn’t get it. He can’t make any decisions on his own. He can’t even remember to change diapers right after they wake up. I’m so sick of it. I do everything else. I can’t get s job unless it’s third shift because he finally found a job but it’s 9-5:30. Which means I would never be able to sleep. He got s job interview for a much better paying job and asked me if he should go to the interview. Like yes why wouldn’t you. Then we was going to take the whole day off of work for a 30 min interview. I was so angry. I still am. I can’t look at him the same. I don’t love him anymore. And I can’t stand to be around him.

So I talk to my mom because I take my marriage vows seriously. And tell her I’m lost so angry I can’t talk or look at him. She tells me to calm down it could be hormones from being pregnant. So I calm down and I’ve been sitting here thinking about this since October 19th. His attitude has sucked. He walks around as if nothing happened. He hasn’t have anyone yet. And I’m just so angry. I finally right him this long letter. Because I have a hard time expressing my feelings.

We need to talk and since I’m so angry with you I can’t do it in person. I can’t forgive you for quitting your job regardless of the reason. You had no backup job and you didn’t stop to think of the consequences. I don’t care that it would’ve affected any police jobs you would’ve wanted in the future. You quit leaving us with nothing. And expecting me to be ok with it and back you up. You had no job lined up to take its place. You didn’t think if how it would affect our health insurance food or roof over our heads. You quit right before Christmas. We may not be able to afford Christmas for the kids because what you make now will just about cover our bills. Yon May be able to sit back and be all relaxed about it but I can’t and I hate you for what you put us through. You said you would take care of this family. That was your first priority. Well that was a lie because you only thought of yourself when you quit and you stupid future dream job. You left us with nothing. No food to feed the kids. My parents had to give us food. Tiffany and ray gave us money for food. Mylo had a temp of 105 all day long. I had no money to get him medicine. I have never hated you so much in my entire life. My mother went out of her way to drive 45 mins to buy medicine for him and you never thanked her. And before you claim you don’t have a phone. She was in our house twice and still you didn’t thank her for everything she did to help us even though that was supposed to be your job. I’m the one who filled out the paperwork for foodstamps and healthcare so we could feed our kids. You didn’t even think of applying. Didn’t help. I asked you the day you quit to get me the paystubs and you forgot and it took you almost two weeks to get them. You had to sell your gaming systems then look at me like I should be proud of you for doing it. Why should I? You did it to yourself. I don’t feel sorry. You can’t make decisions for our family on your own. Your answer to everything was you don’t worry I’m going to get s job. Well that didn’t really help us when we didn’t have any food or money did it? We never would’ve had to be put in that situation if not for you.You had to ask me if you should still do the Georgia pacific interview because you already had a job. Like why wouldn’t you? It’s more money. And we need that right now. This last week you were going to twine a whole day off of work for a short interview. I can’t believe I had to tell you to ask for a longer break. You won’t even consider taking your job back which just proves to me more that you never had our best interests at heart. And this was all for yourself. If you really cared about us and our wellbeing you would’ve taken your job back and worried about future jobs later because we needed the money. Half the time I feel like your mom and not your partner. I’m not going to baby you. You are a grown man. Just now I don’t trust you’ll do what you say anymore. You promised me you would take care of us and you let us down. I have an interview next week. If I get the job I will be splitting the bills and you will pay half and I will pay half. I won’t trust you to look after us again. I’ll take care of myself and you take care of yourself and we’ll combine the kids stuff. Right now the level of hate and resentment I have for you is so strong that I cannot be with you. You make promises but anybody can talk. You can’t follow through and I’m not waiting til it happens again. Right now I can’t be with you. If we didn’t have the kids I would’ve left you. We will continue living together and raising the kids but That’s it. I am too hurt and upset and you with your attitude of forgive forget or don’t talk about it it didn’t happen will have to wait until I can be with you again. For now I can’t. I am so hurt and every night all I can think about is how I couldn’t take care of my poor baby when he was sick. We who are supposed to be his parents his protectors couldn’t be there for our child because you made a decision and that decision had consequences. But I need time to think straight. So please leave me be. Don’t tell me you love me because I can’t say it back. Don’t ask me to watch a show with you because I don’t want to. I don’t know when this feeling will go away. But I need space and time. And you pushing me to make things normal again because you’d rather move forward only makes my anger worse.

He tells his mom and this is what she tells him. And then he responds to her. Granted I have stood by him for 5 years. After he went through 8 jobs in 5 months. I made him get a job and keep t. He never had one before. His mother babies him and I wanted him to succeed so I always tried to be there and understanding. I just wanted him to know how his was not cool and how he affected our children and this is what his mom and him have been talking about behind my back. 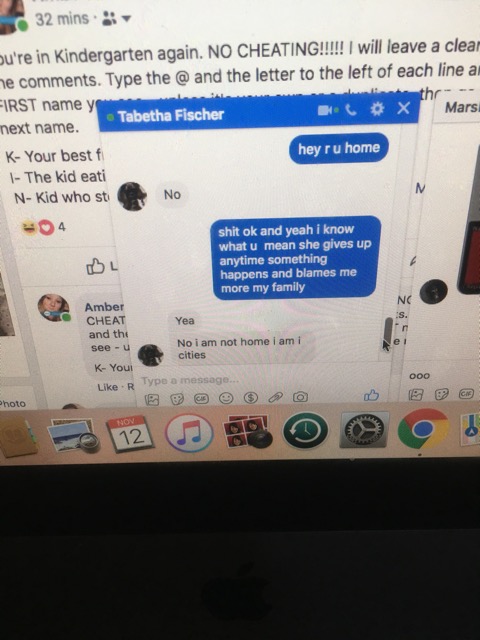 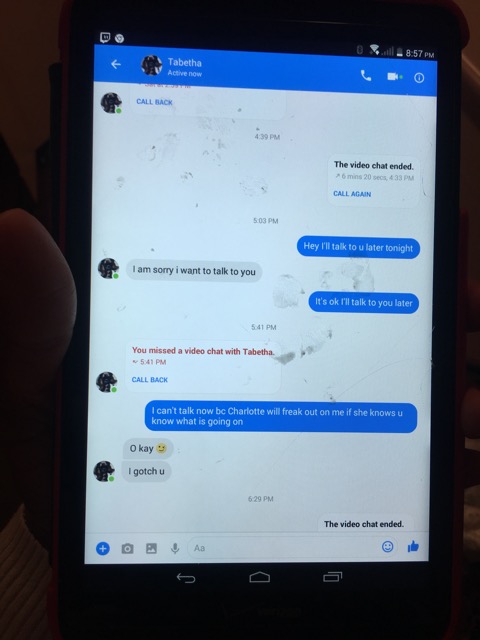 After I read this I was filled with rage. Before I just wanted to take a step back and try to work on things slowly but after that and what he said about me I am done I want a separation. Am I being crazy?