My girl and I need so much help getting her sleep back to normal. 😰

Now I know sleeping for babies changes. But we've suddenly formed bad habits. My girl is 16 weeks old. Up until now, we've been fairly consistent. Its always been a struggle to establish a bedtime. No matter what I do (set a routine, try earlier, not let her nap past 5 pm) she will go down for the night anywhere between 7 pm and 2 am. The only consistent thing is that she's usually up on her own around 7 am and if she doesn't get herself up I wake her.

I also thought maybe she was going through her 4 month sleep regression early. For a couple days, she was eating constantly, unable to nap without waking, and also waking up a LOT at night. (Up until now she was down to once for a night feed). So maybe that's part if it?

Recently she has also formed bad habits (my fault partially). She got her first cold after Thanksgiving and was struggling to sleep. She constantly wanted to eat (growth spurt) which led to her occasionally sucking herself to sleep. Now it's a habit that she never had before.

Along with that, I also let her occasionally sleep on me because she didn't feel good. Now she only really wants to nap on me. The second I put her down she's up, no matter how tired She is or how little sleep she's gotten.

I haven't been successful in any sleep training. The best I've got is that sometimes she puts herself back to sleep. But it's not often. And putting her down drowsy but awake had never worked for us. I'm still trying but it's not getting anywhere.

Sooo really is there anything I can do? I know sometimes babies go through phases or growth spurts but it's taking a toll on both her and me and i don't know if that's the culprit. The most sleep she ever gets is 13 hours these days and that's rare. 😬

Picture for attention and because she's too cute 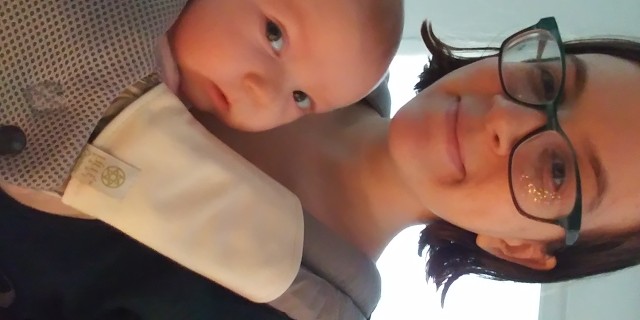