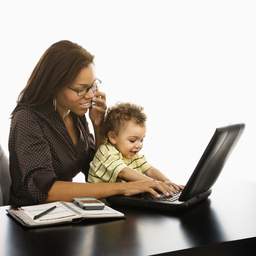 Dealing with a boss who hates kids 🙄

I really hate my boss. Any time my son is really sick or has an appt, he’s not understanding at all and always bitches about it. This was his response to me telling him that my son could barely breathe and I was taking him to the doctor: 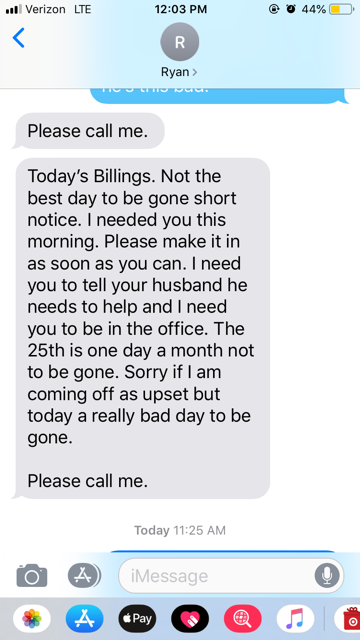 Wtf kind of person expects a mother to put her job before her child? Not to mention, the “Billings” he’s talking about take me literally 30 minutes tops, and before this I had already said I could have my mom keep him for a couple hours if he needed me to come in for anything (not realizing yet that it was the 25th). And his little comment about my husband needing to step up was uncalled for because my husband doesn’t have his license (eye problems) and I’ve told him that before. I’m getting so sick of him treating me like my son shouldn’t matter because I’m the only one with a child. Sorry, rant over!

EDIT for those of you who seem to think I’m somehow the one in the wrong:

I am the only one he treats this way. The majority of our other employees are all related to the other owner (my boss works in the office, the other is in the field but sometimes in the office) and all get special privileges which is the main reason I see a huge problem with this. The woman I started this job to cover for is the wife of the owner in the field. She went on maternity leave in December and she’s somehow been able to keep extending her leave for as long as she wants. She’s changed her date multiple times, my boss that works here in the office has demanded a date from her for months, and yet she still gets to take her time. First he was going to create a new job for her when she came back since they want to keep me in this position, and now suddenly she gets to work part time from home basically at whatever hours she pleases. All because she’s the owners wife. Not to mention his brother and uncle both can take as many days off as they want/vacations/etc and it’s somehow all still paid, yet I have only ever gotten paid for the exact hours I work. Plus I’m the only one he makes track their hours, even the boss’ wife paid herself (in this position we do payroll) as if she was salary and paid herself for 80 hours a pay period no matter how many appts she had during the week, etc, and my boss literally checks my timesheet every week to make sure it’s right as if I’ve ever done anything close to unethical since being here.