Stole my daughter picture and posted it...

A little less than a month ago I gave birth to my daughter, my boyfriend has had no contact with his biological mother in 6 years.

*When he was just 6 years old his mother left him home alone locked in the bedroom while she went to the bar and he got out and was walking down the highway and a police officer picked him up. Since then she took off to Florida after losing her rights to him with his sister (different fathers), she has never tried to come back and see him other than 1 time when he was 10 and she only saw him for an hour but stayed in NY for another 2 weeks. She just recently tried reaching out consistently when she found out I was pregnant and still NEVER received a response*

My boyfriend made it VERY clear that she is not in his life and won't be in our daughters, a few weeks ago one of his family members from work pulled him aside and told him that his mother was reaching out to other family members asking for pictures of our daughter. Yesterday my boyfriend came home and showed me this: 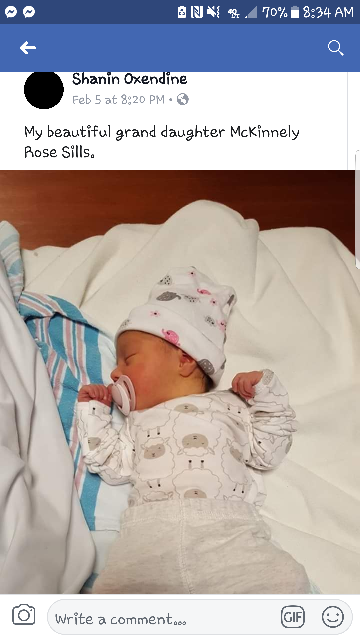 Firstly she didn't even spell my daughter's name right, and secondly nobody gave her permission to post this. Not to mention her Facebook is PUBLIC and anyone can see this post.

After contacting her and asking she take the picture down she refuses and told my boyfriend and I that it isn't our business what she posts on HER page for her friends and family to see. I'm furious! People are commenting "congrats grandma!" And she's going along with it like she has contact with us!! She doesn't even know when my daughter was even actually born, or any information like that. Thank God, but still. Everytime my boyfriend brought up the picture and told her to take it off she made it about how his dad never let her see him (which was never true, he was waiting at his grandma's every time she said she was in NY to see her and she had never even left Flordia), she told him she would send a package and money for our daughter in order to keep her picture up. ARE YOU FUCKING SERIOUS?! I don't want a package or money, all I want is my daughter's picture taken down and my wishes to be respected by a stranger! I'm her mother I'm the one that gave birth to her! I've cried all morning knowing nobody respects the fact I'm MY daughter's mother and what I say goes. Sorry this is long.. just needed to get it off my chest.