Mental Health Support
This group is specifically for women who have or know someone with mental illness.

This is going to be long... Please read it I need help

So about 9 months ago, one of my really close friends started feeling pretty bad about herself, and I soon found out that she was cutting. I have a lot of other friends who are in that "self harm mindset" and she was just another addition to the list, which made me feel pretty shit honestly... who likes having friends that are going through something you cant really help anyway, it was almost becoming a trend at my school, heaps of kids would talk about how they had cut recently or share photos or depressed quotes on insta or wear their clothes so that you could see them, and other crap like that. Not to mention that a lot of my friends are involved with people that i would definitely describe as child predators (creepy old men asking my friends for nudes). It got to the point that I started to get really worried, and I ended up telling one of our teachers, but I dont want people at my school to know that! That was all last year.... This year is basically the same, except that friend who started cutting has tried to commit suicide a bunch of times, and recently. idk why im saying all this but I'm feeling pretty shit now, it sort of feels like everyone around me is slowly dying, and I cant do anything to help besideds being the friends that they can always count on. My family has been super loving and supportive and things feel like they could be looking up but I honestly dont know.

This is what my friend said 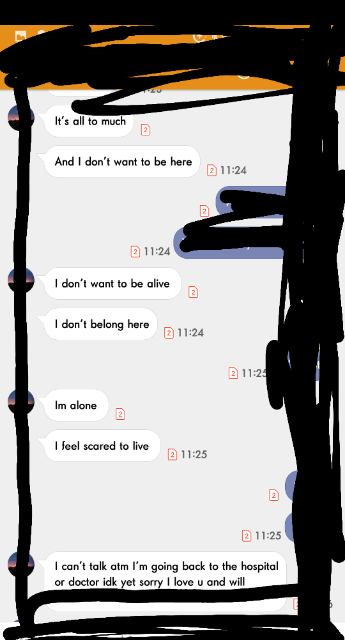