Definitive Proof That Summer is the Sexiest Season

The results are in: Summer is the sexiest season.

We analyzed data from 1.27 million women on our Eve app and found that ladies have the most sex during the summer months of June, July and August—12% more sex, to be exact—compared to the other three seasons. 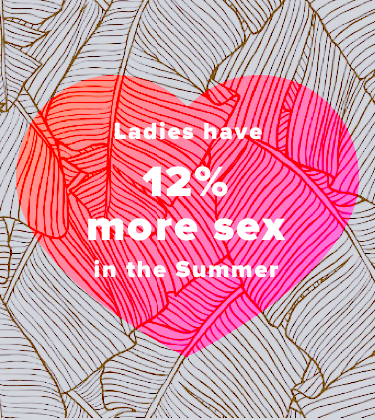 
So what’s the deal? How does summer get us laid?

Sunlight is a major libido-booster, according to Michael F. Holick, Ph.D., M.D., author of The Vitamin D Solution. "Exposure to sunlight triggers the body to produce mood-boosting dopamine and serotonin, plus a hormone called MSH—all of which spur your libido.” Soaking up the sun can also make people more open-minded and adventurous, according to research conducted at the University of Michigan. Which means you may find yourself more open to having that dance floor makeout turn into a one night stand.

Eve gals agree: 29% say that they crave sex the most in the Summer because that’s when they’re feeling tan and fabulous. But being half naked a lot of the time is a big factor as well. 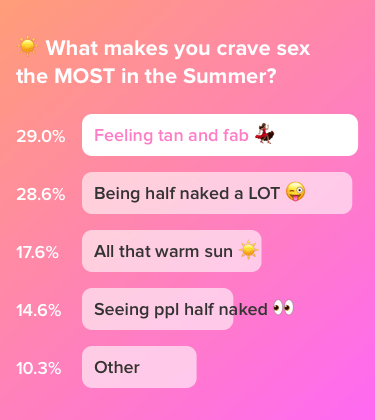 The downside to all this steamy sex? Unprotected sex is at an all time high during the summer, according to Eve data, which may help explain why gals are most likely to test positive for STI’s like chlamydia and gonorrhea in the Fall.

So PSA to all the ladies: keep the wrappers on those popsicles, or take some time to learn WTF a dental dam is. Because no one wants to go back to school with an STI.

At the very least, talk to your partner about getting tested. Here’s some great advice on how to get the conversation going.

And while you’re at it, download the Eve app to get all of the sex advice and learn why Eve ladies win at sex.

Lovin’ this page? Share it with all the ladies!