I HATE MY BOYFRIENDS FAMILY SO MUCH🤬

So, just a little back story to this since I’ve met my boyfriend he has done so much for his family & they rely on him for EVERYTHING! 😤 I hated his family’s guts since I’ve met them they are constantly talking crap to him saying he shouldn’t do this or that but whenever they need something it’s you have to help us out we’re family I don’t care if you don’t have money. Mind you they’re charging him $200 for fucking rent for a damn bed in the living room & it’s a bunk bed!!! They know he doesn’t get paid much & has to pay his truck off. He doesn’t eat there at all he hardly sleeps there but because times are tough his dad not wanting to work oh you have to pay rent for a bed. Just because they took away their foodstamps he automatically has to cough up money but no one else. We’re trying to save but idk why he stills want to give something to his family they’re all so terrible they’ve belittled his existence so much & his sister is a complete bitch she’s called me out my name many times for being in her house to visit her mom like wow 😂 they had the audacity to tell my bf not to let me come over because I must’ve started it but she’s the one with the problem because I ignore everything 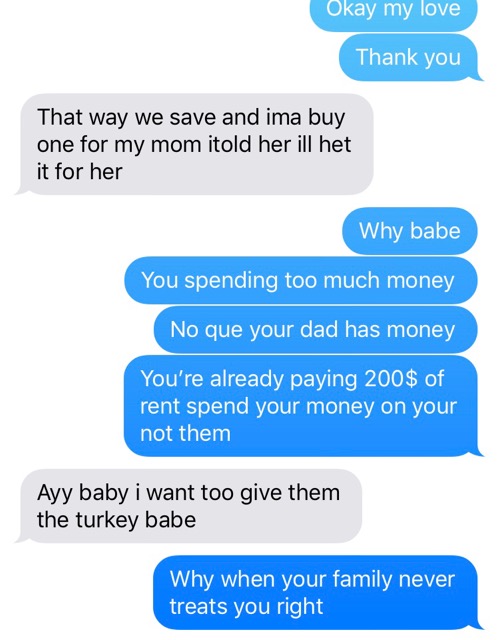 she does to piss me off but I just tell her don’t mess with me I don’t disrespect you so don’t do it to me. Wow like thank god for my patience. 😊 His brother is the same damn thing always talking crap to him for nothing & they’re just bloodsucking him dry. I’ve never talked to any of them but omg when I come over it’s omg why is she here bitch this bitch that but no one can explain why they have a problem with me 😂 but I can explain it fully why I do with them but I never open my mouth because I respect his mother & his mother only. Love her to pieces she’s always made me feel comfortable & I think I would’ve lost my mind if it wasn’t for her. OPINIONS ANYONE??? Idk what to do he just sits there & takes it & ends up stressed crying telling me he hates his life he wish he was dead sometimes. He never stands up for himself because of his dad he’s always on their side never on his. Idk how to help him. Am I overreacting on him wanting to give his family a turkey & more without them helping out??? Anyone going through things like this 🙃😩