Postpartum Mommies
After the baby is born

My daughter was born 9 days early on July 11th of this year. With in the first week of her birth she started to develop this reddish purple streak on her forehead…on one hand I thought maybe she just scratched herself but on the other I considered that maybe my 2.5 year old toddler knicked her with something so I kind of wrote it off, although still I felt sorry and kind of beat myself up that I could’ve done something to prevent that from happening. But in the next week or so, the streak was starting to look less like a streak and more like a blob that was growing slightly bigger day by day. As it turned out, the blob is an infantile hemangioma. My doctor explained that it will continue to grow for the first year of her life and then it will shrink and fade over time but it could be well into her school age years and it may not ever entirely go away. Typically that wouldn’t concern him. It’s essentially just what people more commonly call a birth mark and they are harmless BUT there is a potential it could be damaging depending on where it is and how large it grows. (Later that night I googled ‘hemangioma’ and found a lot of shocking images, they can really grow out of control)

My daughter’s hemangioma is on her forehead like I mentioned…just a little ways above her eyebrow. And my doctors concern is if it continues to grow as rapidly as it already had in the first 3 weeks of it’s initial appearance, there’s a possibility over time it could grow to damage her vision in that eye. So my beautiful little angle and I meet with a recommended dermatologist where we’ll start treatment to (hopefully) prevent that from happening.

In conjunction to her physical health, I also have to consider her mental health. This is something that she could have on her face well until she’s 5-10 years old, even with treatment. And man I hope I don’t get attacked for this - it’s just genuine thoughts I’ve had to wrestle with myself - but while I wholeheartedly believe we as a whole are much more accepting of diversity now than ever, I’m not naive…there’s still a lot of cruel people walking among us and I am equally as concerned about that. I have had countless people, including strangers, inquire about my daughter’s hemangioma and it’s not that anyone has been disrespectful about it to me, but just the repetition of the same questions started giving me so much anxiety, especially at the time when I didn’t have answers and I was blaming myself, I thought it was something I had done.

So to the part where I feel like shit - just like I did with my son, I take about a million and one pictures of my daughter. But…I edit the hemangioma out of the photos I share on social media because selfishly I just don’t want anymore nagging questions about it. And to me - the hemangioma really isn’t a big deal. Like putting the medical risk aside, I can and do look right pass it. All I see when I look at my daughter is a typical baby doing baby things all while being adorable and irresistibly kissable. But other people immediately notice the hemangioma. And I couldn’t imagine if it were any bigger or worse than it is - because it’s still relatively small and smooth. And maybe it’s because for so long I had convinced myself that it was my fault, that I feel like that’s where other peoples head goes to when they see it - that like I hurt my child or allowed for my child to get hurt and that’s what that mark is. So I guess I’m actually more concerned that people will think I did something to cause it than them just asking me about it - because now I do know what to tell them.

I’ve had some time to digest all of this. She’s still basically a newborn so I don’t really see the sense in stressing too much about what could happen in the years to come from now, especially since I am choosing treatment - I have faith that my daughter is going to be just fine. So anyway today her father took her brother out and it’s just us girls hangin out so I gave her a nice warm bath, fed her and placed her in her swing where she dozed right off and has been sleeping ever since just moments after I snapped and shared this photo to my Facebook story…hemangioma and all ♥️ 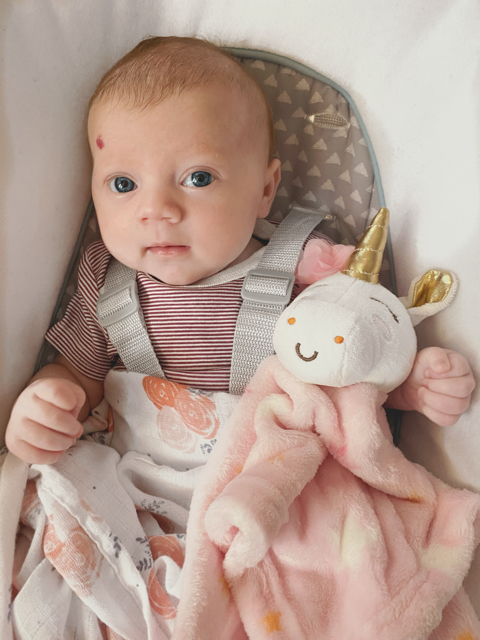 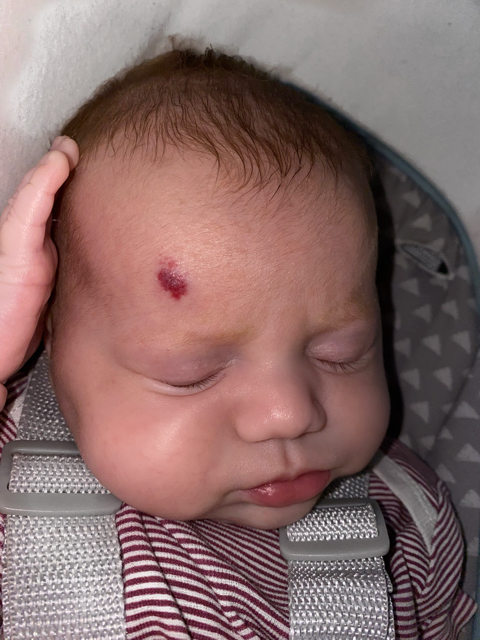