At 37 weeks I was beyond miserable. I told my doctor I wanted to be induced the earliest she would let me. My induction was set for Feb 9. On Feb 5 I went to the clinic and received my COVID test and final ultrasound.

My baby had been measuring in the 30th percentile. I was thrilled. I was 100 pounds pre pregnancy so I excepted a relatively small baby. The ultrasound tech said she wasn’t supposed to measure the size on this ultrasound but said she would. She did and said oh wow you are having a big baby! I was confused. I asked if she was sure. She told me the baby measured in the 84th percentile and was already 8 pounds. Keep in mind I’m 38 weeks. I immediately was nervous. I was aware they could be wrong but what if she wasn’t???

I walked into the appointment and told my doctor I was terrified. She told me she could change the induction to a c section. I went back and forth and ultimately agreed. I didn’t want the baby getting stuck and needing an emergency c section.

Feb 9 I arrived to the hospital at 530am. They hooked me to an iv and at 7am I was walking to the OR. I leaned over and they gave me the spinal block. It wasn’t terrible at all. It was mostly mind over matter.

They leaned me back and called my husband in. At this point it was around 735am.

The doctors talked to me and around 750am the doctor announced rupture! I thought, oh God I’m bleeding out. She told me it meant my water broke!

At 8:02am the doctor says wow! Look at all that hair. I immediately hear a cry. Sure enough she held up my 8 pound 3 oz baby girl. I thank the good lord that the ultrasound tech measured her for me. I would have never delivered her naturally.

Within 10 hours I was walking and the next day I was taking a shower. I took pain meds for three days and was discharged.

C sections save lives. Don’t let people say you took the easy way out. My doctor said I would have labored for days and ended in an emergency c section. Plus my down stairs isn’t ruined or ripped ;) 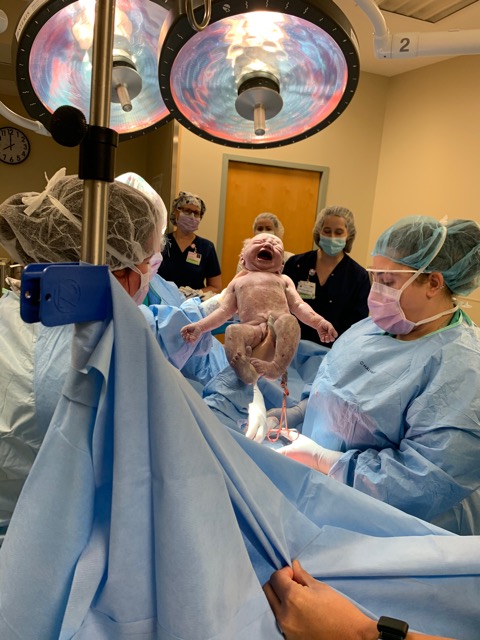